One of the most common criticism by members here, is that value investing does not work in Malaysia, because the market is different etc.

Value investing is defined by one thing only.

“Margin of safety between price and intrinsic value.”

And the intrinsic value of a company is defined by a multitude of factors, growth, management, moat, intrinsically lucrative industries, assets etc.

Just because a company have low Price to Book ratio and P/E ratios, does not necessarily mean that it is an investment of value or one that will do well.

It does however, increase the probability of it being an investment of value and vastly lowers your probability and magnitude of losses, in comparison to overpaying for growth or great companies, especially if the growth fail to materialize and the investment is found to be a dud.

Warren Buffet have in fact repeatedly said he felt he made a mistake in not buying Amazon or Google back in the day. Although I wonder what was the first time these 2 companies came to him, and what were their valuations then.

Amazon can be considered a value investment, if for some reason, you consider the price of Amazon now far below its intrinsic value (for which you have a calculated a range after doing in depth research)

Unfortunately, most new value investors (me included) often make investments mostly based on the integrity of the balance sheet and how valuable the balance sheets are. The Benjamin Graham way.

We often forget to take into account “Return on Equity”, which has always been said very consistently by Warren Buffet as the most important factor when investing, alongside, “Return on Invested capital”.

If one read carefully the shareholder letters by Berkshire, at one point in 1987 or so, the return on equity of wholly businesses in Berkshire at one point exceeded 80% and incredible result, considering Nestle’s (Malaysia division) is only 75%.

I’ll be honest with you, up to a few days ago, I too did not really understand the importance of return on equity, until i read the Berkshire Hathaway letters from 1967 to 2018, and went and did the following example.

As it turns out, there is a difference between, knowing things intellectually and truly understanding it. 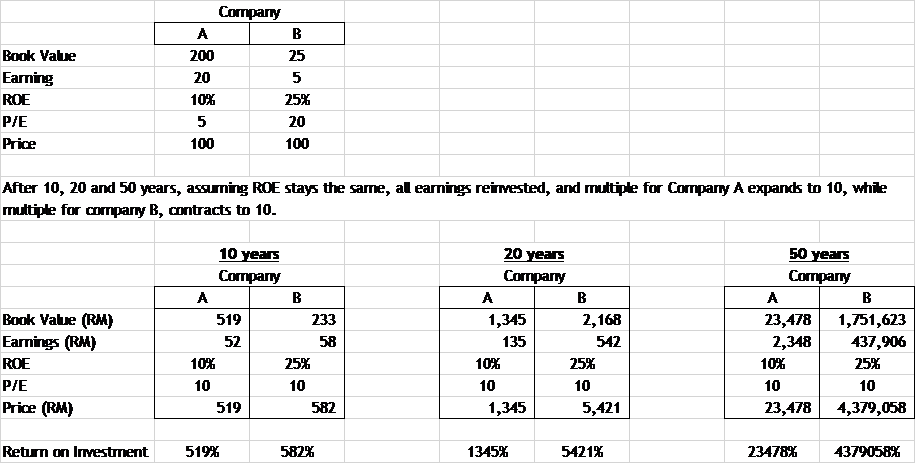 Imagine company A and B.

Company A has book value of RM200, and for the sake of simplicity, let’s assume that the assets are actually worth that amount. They earn 10% on equity, and is currently value at 5 times P/E which can be considered to be quite undervalued.

In fact, it very much does look like property development companies in the Bursa today!

Now Company B on the other hand, has a book value of RM25 but earns a fantastic 25% on equity. Due to how good of a company it is, it also trades at a higher valuation of 20 time P/E, arguably around fair value or just above.

This company may very well be say, Public Bank, which to be fair, now earns about 15% on equity instead of 25%.

Now, being a value investor with healthy dose of Benjamin Graham in me, I would naturally gravitate towards company A

As we can see in the table above, by the end of the 10 years, and return on investment in company B slightly exceeded company A’s, despite valuations doubling up for Company A, and doubling down for Company B.

This is the story of Public Bank and Berkshire Hathaway, and many other incredible companies such as Coca Cola, Disney, Washington Post, Microsoft, Google etc.

Just looking at our Malaysian Berkshire, Public Bank. If one were to invest just RM1,000 into public bank in 1967, and including all dividends received, your investment would have grown to RM4.1 million.

Even more interestingly, if one invested in RM15,000 Public Bank as late as 1992, and then reinvested all dividends, your investment would have still grown to RM1 million by today.

How does this relate to our investing philosophy?

Well if this was the case, the goal is clearly to find incredible companies with incredible long term scale to reinvest the earnings on our behalf and relentless earning power.

One would only need a RM10,000 investment in one of them to be rich 50 years in the future.

Except, being able to find these incredible companies is so incredibly difficult, especially at the right price. Much less hold them for 50 years.

Given Malaysia’s small market, and having gone through the reports of all of them, I can only find 5 to 10, and most of them are very expensive, or whose growth and ability to reinvest capital is not as certain, or whose management may not be truly top class, and only 3 or 4 have business characteristics and prices good enough for one to invest money in.

In addition, the level of skill, knowledge and experience needed to judge the intrinsic value of earning ability is far far beyond the skill needed to read balance sheets.

Orient, OSK, Plenitude etc, anyone with half a brain can see that these are good investments based on the discount to book value as well as the low valuations placed on the earnings.

But to be able to see the future of Public Bank in 1967 and judge the character and ability of Teh Hong Piow then, and to hold for 50 years. That is incredibly hard, and that is just part of the genius of Warren Buffet.

Especially since when paying for earnings, one could very well think you are buying the next Teh Hong Piow, when you are actually paying for Vincent Tan, and thus lose 90% of your investment from peak.

How do we find these incredible companies?

Well, the only way one can ever find these companies, other than by luck, is to constantly learn, read, experience life and refine one’s thinking, thought process and mental models.

And this is something I doubt one will be able to do if you spend most of the hours in your day looking at the blinking numbers on a screen and reading the charts.

For most traders who are mediocre (it’s just statistics, and it’s a zero sum game), you are not just losing money on your investment and transaction cost, you are also paying the price of having a far lower probability of finding these companies.

For the very small minority of super traders who make great money trading, I would congratulate you, and I hope you make more money, and if you enjoy looking at the screen all day, good for you.

But I doubt looking at a number go up and down for no reason could be any fun. And the thing about trading, is that you can really die at any time. So many super star traders lose billions suddenly at the end of their careers. And with KLSE market not having any other trading functions such as shorts and options, you are playing a game with both hands tied to your back.

Personally, i’ll just continued what i’ve been already doing and continually focus on improving my thinking and working very hard to identify these companies, and to focus my capital on them. They will be my first preference, i’m also happy to say that luckily for me, my more material positions previously, were already in some of these companies.

Luckily for me, i already find this process much more enjoyable than looking at blinking numbers on a screen!

My investment criteria moving forward will place less weight-age on a large discount to balance sheet, as i’m not a liquidator after all.

However, i will still invest in Companies that are currently of pretty good value such as OSK, Orient, Plenitude, Gadang, Mahsing, Tropicana etc.

You may earn less, but they still fulfill the most important rules of investing.