Well. This was an interesting week to say the least.

And as markets were cheap to begin with, I was 100% invested and could not take advantage of the situation.

When it comes to timing, there are few worse than me. I placed a very significant deposit on Saturday, which meant the funds were ready by Monday. And being a small ikan bilis. I could buy whatever I wanted in about 10 minutes. Which I did.

Before the market decided to dive roughly 8% in 2 days.

And as always, in times like these, when I am strapped for funds, margin finance looks very appetizing, and so, i started studying it again, as well as getting quotes from my current broker and other dealers.

Do note there is a difference between bank margin and IB Margin. The second has allows higher leverage, but charges higher interest rates, and have rollover of 0.5% every 90 days. Which means you pay an extra 2% to begin with.

Do not use IB Margin, unless you’re a special kind of foolish.

One of the things I thought about, was how, even the best and most secure company in the world, Berkshire Hathaway, fell 50% during the 2008 financial crisis.

Google fell by more than 60%. And if you were to study the great depression, peak to trough is almost 89%.

So basically, what is a reasonable margin %, that will not affect our abilities to hold during a crisis, that will ensure you will almost never get margin called.

Margin of 30%: One will not get margin called up to 70% drop in portfolio. However, by 75% drop, one will be forced sold and lose everything.

Margin of 40%: One will not get margin called up to 65% drop in portfolio. However, by 70% drop, one will be forced sold and lose everything.

Margin of 50%: One will not get margin called up to 60% drop in portfolio. However, by 65% drop, one will be forced sold and lose everything.

This trend seems to follow up to 90% margin, before the figures start to get weird due to its geometric nature.

For reference, here is a picture, 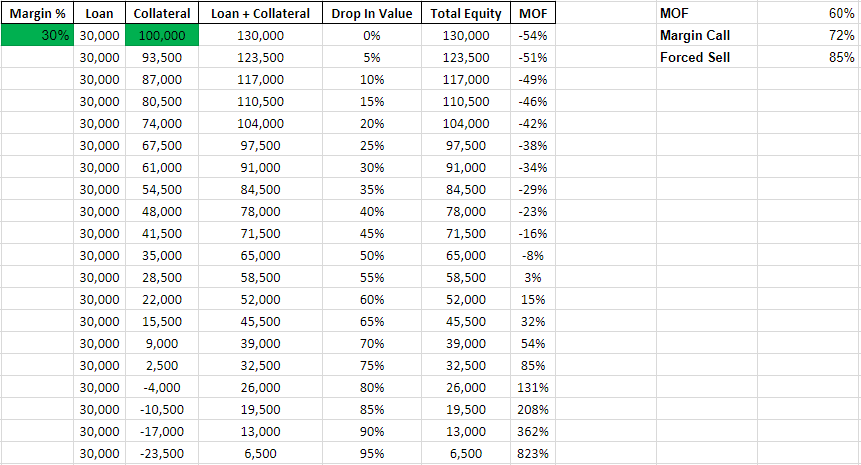 As well as a link to the calculator I created. You only need to fill in the green boxes. Collateral is your current share portfolio, with zero leverage.
MOF Calculator

This is assuming that like me, you have more than 90% of your net worth in stocks or hold a lot of illiquid assets.

However, the percentage that is safe also depends on when you start using the margin account. It’s very different to be using a margin account on a day to day basis, when markets are booming.

And to use it when the market and your portfolio is down 20%, 30%, 40%, or 50%. The level of aggressiveness that is safe is also likely very different.

Its safer to be more aggressive, the lower the market falls, and unsafe to be agressive during a bull market. Which is probably the antethesis of how you’re feeling and what you want to do.

One thing to note, is that as a crisis begins, due to the fall in your portfolio, the amount you can put to work is also likely to be very different.

One can of course, use FD as a base for your margin account, ensuring your have you full power during a crisis.

However, this would mean that the sheer act of holding a share, even without margin, would cost you roughly 2% (which is the spread between the interest rate from FD and the Margin Loan) a year.

After thinking it through, I think a relatively safe day to day percentage is about 15%. With you increasing it as market falls.

However, one should not that as the market falls, your leverage and thus margin of finance will naturally increase as your shares are marked to market while the loan is fixed.

Be sure to have a good relationship with your dealer, it can be very helpful when they hold your balls in a crisis. Some banks are quite open to you making a commitment to pay a certain amount every month etc to meet your calls.

This however, is highly risky, as people act differently in a crisis. And its risky to survive at the kindness of others.

In a nutshell. If one were to use margin, never margin past 30% in normal markets.

Best if don’t use margin!