For the most part, I come from an investor’s perspective. And my current portfolio reflects that.

Why is this the case? Why do speculative companies go up and down by a higher percentage?

In my opinion, this is because, the companies that usually gain in the most (marginally) in terms of market capitalization (share price) in turnaround scenarios of once forsaken industries, tend to be companies which have either incredibly speculative capitalization structures or high operating cost.

This is quite the interesting paradox, as one would think that a well managed and well capitalized company should take better advantage of this.

However, in the event of a downturn these “rubbish” companies also tend to fall the most. Which makes sense?

This was a phenomena confused me a little, and so i decided to dissect and understand it further.  Especially since, from what i have observed in i3, the top performers of the last few years, Ooi Teik Bee and Icon8888, tend to like or recommend these quite a bit.

This means that the company is often very heavily levered. Where the, EV or Enterprise Value  (Market Capitalization + Borrowings (Loans and Bonds) + Minority Interest – Cash and Cash equivalents) of the company, consist of 30% or less of the market capitalization.

With the remaining 70% or more being made up of either senior securities, such as bonds, sukuk issues. Or, borrowings and loans from banks.

For example, the average palm oil company might have an average cost of RM750 per tonne, this company on the other hand have a cost per tonne of RM1,000.

Now, there is a very special distinction you must make sure to identify. It needs to have fallen into becoming a penny stock. Not because there was a share split, or was issued at less than RM1 recently etc etc.

Why the gains much higher when compared against good companies over the short term? 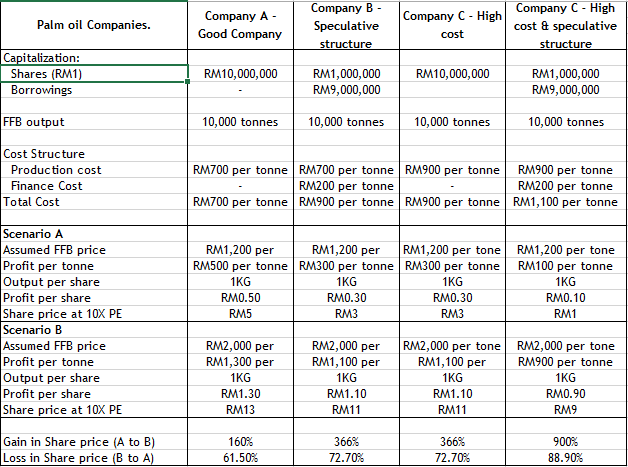 Referring to the table above, one can see that it’s as if, the more “rubbish” the company, the higher the speculative gain!

Let’s analyse it down section by section.

Now remember, this is a speculative venture into speculative shares. So one would have to abandon the value investor perspective (I’m inoculated since birth against this unfortunately… or fortunately?), and instead of looking at shares as fractional ownership of a business, one now has to look at it as a bet in a casino.

From a gambling perspective, if one thinks that, for example, that oil prices are going to in a significant manner over the next few months, the best companies to bet on are the companies with very high borrowings.

Why? Because in this case, the majority of your bet is financed by the banks!!

While the majority of the profit that may materialize due to higher oil price, belongs to you, the shareholder.

If the enterprise value of the company consist of 10% market capitalization and 90% borrowings. It’s as if the banks are funding and taking on 90% of the risk for your gamble.

As an equity holder who bought in at that valuation, it’s a heads I win, tails you lose situation. One of the very few moments you have in life you can screw over and take advantage of a bank.

Let’s look at MASTEEL, a speculative stock recommended by one of the best speculators in the KLSE, Ooi Teik Bee.

When he first recommended it at RM0.5, I’m guessing in June 2016? Not too sure as I don’t subscribe to him. The company had just made its first profit in 2 – 3 years.

From what I know, it’s still in his Miss Universe list today.

At today’s price of RM1.68, market capitalization is now RM530 million, with net debt at RM324 million based on latest quarterly report.

In this case, if you are still gambling, the banks are now only financing 32% of your bet, with you paying the remaining 68%.

At this price, it is no longer that attractive as a bet, but may still be acceptable as an investment. And as such, one should sart thinking of it in investment terms.

From that perspective, considering the rise in earnings, the drop in debt of just RM16 million is pitiful.

And even if we assume that earnings remain the same as the previous record quarter, it would take around 4 – 5 years for the company to clear its debts. I don’t believe that steel price is going to stay at this level for 4-5 years, and that no competitors will come up.

For the record, until 2017, MASTEEL have never made more than RM30 million per year. What has changed then?

Well, Ooi Teik Bee did say that the prices of steel bars in China is now actually higher than Malaysia.

I am not sure how true that is, but that was due to forceful capacity rationalization to reduce pollution. These factories may very well start up these excess capacities again. And, lets not forget Ancelor Mittal in India. Steel can still be shipped.

The economy is dynamic, prices of commodities or cost based items do not stay high forever. At this current price, i’m not that sure if it still deserves to be in his Ms Universe list.

A rising tide lifts all boats. As we can see in the table above, the marginal difference due to positive developments, is much higher for a rubbish company than a good one.

Lets use a student as a metaphor.

The rubbish company is like a student, who is failing in Bahasa Melayu SPM and cannot go to University. To suddenly being able to go to Sunway University, because he asked for a remark and passed then.

That is a huge difference job prospects etc.

While the good company, is a like student who was able to go to National University of Singapore, but suddenly got accepted to Harvard. He is still a top performer either way. His prospects is now just slightly better.

Also, the first student was probably more underestimated than warranted, and the first may have been a little overestimated to begin with.

There was a study that was published in the April 1936 issue of Journal of Business of the University of Chicago.

It observed that in bull markets, low priced issues tend to rise faster than higher priced issues, and in bear markets, they tend to drop a lot more as well.

Psychologically, its easier for a RM0.3 stock to rise to RM1. Compared to a RM30 stock rising to RM100.

Remember, you are speculating here. So sentiment and detachment from logic matters.

A value based critique of this approach.

Looking at shares as fractional ownership of a business.

If one were to purchase a business in full, one would be taking into account the loans held by the company and if it’s capable of paying it back.

One would also look to see how good the company is compared to its competitors, and ignore price per share, while focusing instead on the value of the company.

This speculative approach, completely discounts and ignores that.

The speculator does not care if the profit/cash ultimately goes to the banks or the investor. He just wants to see the higher profit figure.

The speculator does not care about the long term prospects or earning sustainability of the company. Good times and high prices never last as the market is dynamic.

The speculator wants to ride the train of goreng. Where high P/E is given to companies that have a temporary record earning., before the sudden fall when earnings go back to normal. Optimally, before that happens, the speculator hopes to be long gone by then.

The Bursa is full of companies who have risen to incredible highs, with incredible p/e’s given to the record high earnings of mediocre and cyclical companies, before the inevitable crash or drop.

One can see it every day in the comments that ask “I chased high, now i stuck, what should i do?”.

As always, when speculating, thread with additional caution. Never forget that you are a speculator.

A probability of a disaster goes up when a speculator mistakes himself as an investors and puts the vast majority of his or her net worth into such speculative stocks.

Anyway, for the gamblers out there, at today’s prices, a bet in SAPRNG is 24% financed by market capitalization and 76% by the banks. Might be worth a punt.

Personally, i’m probably staying away. Its too hard to determine the value of its intangible assets and oil/gas reserves.

1 thought on “The Art Of Gambling in Speculative Stocks.”